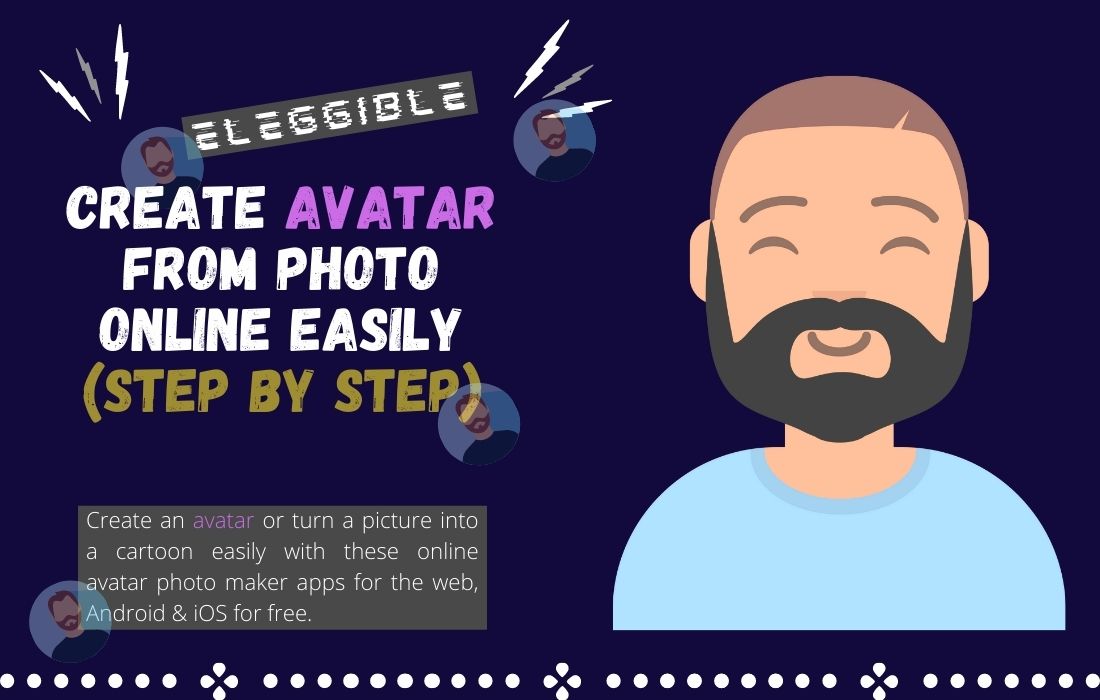 Bored with that usual same profile picture of yours, try something new by creating your avatar from photos online. There are many apps available that you can use but they are in huge quantity but not all the apps are equally good to create your avatar. We in this article covering all the best and useful apps from which you can easily create your photo avatar.

Just select a photo that you want your avatar to look like and your avatar character would be created and it will turn the picture into a cartoon just in seconds.

If you want to style the full body of your avatar including skin tone and such things, then for that also there are many apps like Bitmoji and zepeto available, under which there are countless hairstyles, clothes, different body types, shapes of eyes, nose, and mouth that you can select from.

It also keeps getting updated with the latest version and added clothing that maintains the excitement to try out new looks on your avatar.

Since you have such cool avatar characters you no longer need to keep that usual profile photo on your social media, just try out these amazing online and Instagram avatar maker.

The first-ever avatar creating feature was launched by Bitmoji back in 2014. At that time we all were new to it, therefore many of us did not pay that much attention to it as it was something new.

Creating your avatar character, with body features you like, styling hair and clothes was something that we had only done in simulators games.

But with time, the craze of using an avatar character started to grow and many people find it too amusing and intriguing, which led to the launching of many more avatar creator apps in the market.

As of now, the hype is so much that there are online avatar creators also, even with the awesome feature, like creating face expressions of your avatar.

How to Create Avatar From Photo? 4 Simple Steps

As you know that there are many apps to create avatars from photos. Apps are available for both androids as well as ios.

2. Once Downloaded You Can Get Started-

Start with selecting your gender, your avatar style, and facial recognition. You can also make changes anytime you want.

After selecting the facial recognition option, you have to click your photo, and your Avatar will be created. You can also choose the Manual Creation option and create your personalized Avatar manually. Here, you can dress them and create different expressions, postures, etc. according to your preferences.

After creating your Avatar, save your work in the avatar gallery, and then you can share it on social media. You can also edit it accordingly and use it as your profile picture.

There are many websites like Avatar Maker, Character Creator, Hexatar, Get Avatar, etc. which help to create Avatar from photo online by choosing all the essential characteristics like face, eyes, nose, hair, clothes, etc. After making the Avatar, you can download it as a PNG image or SVG file.

We have used all the apps and selected the 15 best apps to make avatar from photo for you.

All the apps are available for Android & iOS and you can download them easily from Play Store and App store.

The first one is zmoji. It is a phone app that helps you to turn pictures into cartoons. It is a free application that you can quickly get in the play store.

With the presence of a well-integrated keyboard, it makes it easier to share images on social media. It is a user-friendly application without having any difficulty to use. Zmoji is an excellent choice for personal emoji makers with your photos.

Avatoon create cartoon avatar from photo of yours with its powerful editing tools. It is an avatar picture maker and emoji editor app. It is available on both android and ios. You can make cartoon profile pics of yourself, your friends, and even of your pet. You can easily customize your artwork with avatoon.

It creates a digital mini-you using its various editing features. Along with your personalized, cartoon, and unique avatars, it also makes customized stickers and emojis. Avatoon is a great choice that you can go for!

Befunky is the best app to create avatar from photo designed with various filters and editing features and works as a photo studio. It helps you to turn pictures into a cartoon in just one click. It has a transparent background, renovates portraits, and crop photos.

Befunky also allows to apply photo effects, edit photos and even create collages with photos. It will enable you to create your Avatar without any difficulty. Moreover, it has a robust interface and is a powerful mobile photo editor.

Bitmoji is an excellent cartoon avatar.photo maker. It will make an avatar that will pretty much look like you. When you take a selfie, it will scan your hair, lips, eyes, nose and create an animated version of you.

It will build an entire library of your avatars featuring different styles of you. One of the essential features of bitmoji is that it supports third-party applications like Snapchat and Gboard.

MomentCan is another cool application where it turns pictures into cartoons. Is easy to use and has a powerful user interface. It allows you to create funny cartoons and emoticons from your photos.

You have to select a picture from your gallery or take a selfie-and it is all done. It is an excellent avatar pictures maker that helps you to create real good avatars. You can also try it along with your friends.

If you are an admirer of manga comics, then this cartoonizer app for android is for you. This app allows you to make your anime character. It has lots of features like it has graphics of manga style, facial expressions and features like eyebrows, smiles and many more.

This also comes with many emotions, along with thousands of funny stuff and materials. It forces you to use your imagination and create your beautiful Avatar.

MojiEdit is another cartoon avatar maker from photo app that allows you to create avatars along with different designs.  It has tons of features to use like stickers, emojis, and a lot more. It can be installed both in android as well as ios.

This app has developed different blend shapes and facial expressions. The Moji Edit uses AR technology to customize AR filters and face masks and add more effects to them using the editing tools.

Can You Create a Cartoon Character by an Avatar Maker?

You might not be comfortable putting your pictures on social media, but through these avatar makers, you can easily express yourself in any way you like. You can even download or save a full-body Avatar or just a head image. It is a visual representation of you and can be funny, melancholy, cartoony, etc.

So, with the help of the applications which you can easily download and create a cartoon-like version of yourself by choosing a variety of faces, hairstyles, and outfits that can be customized by you themselves and share on social media.

So, these were the best apps that you can use for free. According to our testing and filtering, we have come to the conclusion that the best app from this list is Zmoji and Avatoon as both these apps are free and have lots of features to use.

Overall these avatar creators’ applications have now given a new definition to human illustrations, much more detailed and latest versions of anatomy.

It gives you the idealistic cartoon version of your very own realistic photos which further shows that how technology has advanced over many years. These apps help to turn pictures into cartoons automatically.

These applications provide some fun and playtime to its users to get relaxed and try something new. It has also played a major role in the marketing industry as people promote their social media accounts with the help of these avatar-creating apps only thus it has also set its step in such a vast industry.

It’s also a lifesaver for those who are not so photogenic as now they don’t need the real photos anymore instead they can just put up their avatar as their profile picture.

Social media has also increased the hype and presence of these applications and Snapchat is that one application whose main idea is based on people’s avatar only, so it’s a great achievement for the avatar creator app as the whole concept is carried by the social media app.

Thus, by all aspects covered, no wonder that avatar-creating applications have been such a great success and accepting to their audience.